I got into Public Monitoring Committee (PMC) by chance. A new law was passed in 2008, but nobody was involved in that kind of business. I was invited by a lawyer from Memorial, Ernest Mezak.

Other human rights defenders, who attended prisons, realized that they were attending them, as if they were some kind of Buddhist temples – it was hard to understand how things worked inside. The members of Memorial, Ernest Mezak and Igor Sazhin, could not understand the language. They would go into a residential section and see that people were kept there, and that was all. But I saw immediately that only outcasts lived there, that they were pushed in there as the scum of the local community, and that the administration supported this internal segregation. A prisoner could say “look, my washer was taken illegally.” What was taken illegally? His soap? No, a washer is a piece of razor blade that he shaved with. This is just one example; there are a lot of nuances there. This is why I became engaged as an expert.

«I have been working in the penitentiary system for 30 years. I was a deputy head of a prison. I know this system from inside.»

According to the law, members of PMC have the right to inspect prisoners’ detention conditions.

We cannot afford to work on a regular schedule. According to what my colleagues told me, in some regions visits by PMC members are funded by governors. This does not happen in the Komi Republic. 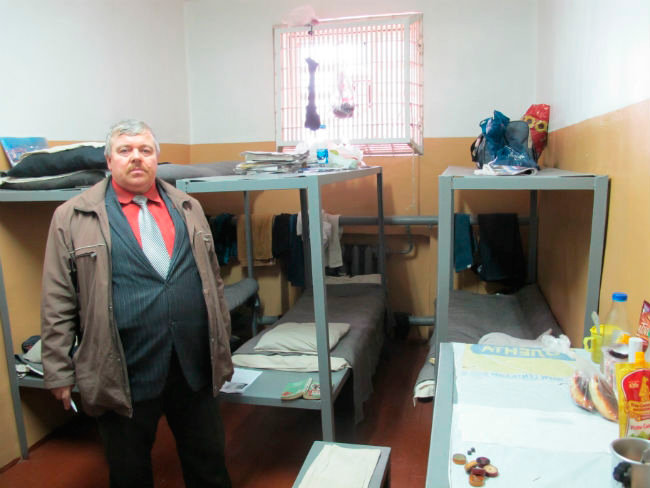 Nikolay Didyuk during his work in Public Monitoring Committee.

The problem with PMC is that our resources are limited. We have never been to Vorkuta; we have not visited Ust-Tsilma either. It astonishes me that the authorities would not cover travel expenses. I am not going to spend my own pension on it, I am not that rich.

We normally visit by request; sometimes we also take the initiative, if numerous violations of prisoners’ rights are reported. They mainly complain about detention conditions: daily living needs, sending and receiving packages, and visiting opportunities, but those issues are being resolved. At the moment, we are trying to work together with the local branch of the Federal Service for Execution of Punishment (FSEP); we have reached some common ground.

Once, the guards of one prison strong-armed their inmates, and we questioned the legitimacy of such procedures. This was happening in 2011-2012. We wrote complaints, but the prosecutor’s office requested to have a concrete suspect presented to them, they simply wanted to have it all on a silver platter. Obviously, if the victim pointed at the perpetrator, he would endanger his health and life. Igor Sazhin decided to take it upon himself — we made some analytical work, reached the head of the department, and the problem was solved. He instructed his subordinates that any legitimate acts of force in that particular colony from then on had to be recorded on video. That was it! The problem was solved immediately.

In another prison that we visited, inmates did not bath for two weeks. Some 20-meter long water pipe had not been laid. So I went in the toilet, which was used by the administration, and turned on the tap — both hot and cold water was running. I asked «So why is there no water in the baths?» The officer replied «There would not be enough to go round.» I put it all on record, then it was published, and that officer received a call «Take all your staff and go dig that pipe. Since you haven’t done it in the fall, you’ll do it in winter.» The head of the prison could not even conceive the idea that an epidemic could have started. And that would be scary. He even had the nerve to tell me «You will write what I say.» This is the Gulag mentality.

«Some FSEP officials confide flaws to us so we could correct them. These people are under constant control. They may be deprived of bonuses or discharged because of those complaints.»

I get proposals to head different public bodies, but I refuse, because I know that, if I am doing something, I want to do it properly, in order to make a difference. As the Bible has it: you will be judged by your deeds, not by what you thought or planned.

I am leaving PMC next year, my third term comes to its end, and I cannot work here anymore, according to the law. I do not know who will take our place; this empty space may get occupied by wrong people.

Russia’s major problem is legal illiteracy, which comes down at bottom to our boneheadedness. As Pushkin put this “we are idle and incurious.” And what is even sadder is that our servants have become our masters.