Runs projects on the development of local self-governance 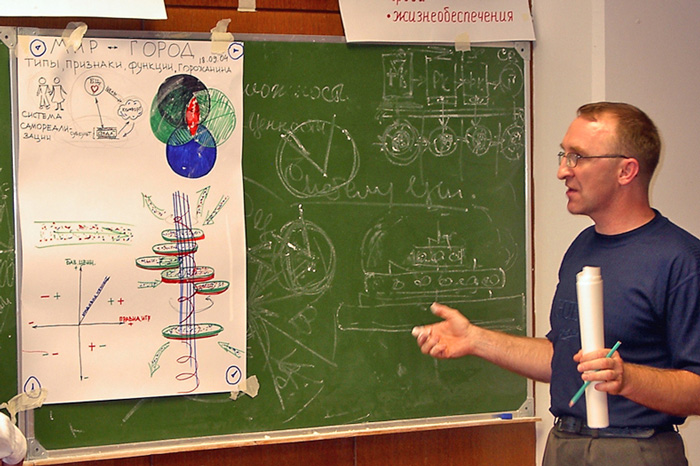 My personal development as a human rights defender was taking place during perestroika, when I studied at Rostov State University. Our professors were liberal-minded. I was reading such journals as “Druzhba Narodov”, “Oktyabr’” and “Znamya”. At some point, I also read “The Gulag Archipelago” by Aleksandr Solzhenitsyn, and something switched inside me.

Back then, I also tried doing business, but I was not successful. Then I somehow ended up here, in this organization. Initially, it was a joint stock company “Mother and Child” (abbreviated as MIR). It was organized by a factory committee that consisted of women. They not only worked in one place, but lived in one district, and their children attended the same school. This was a place for mommies to fulfil themselves. Anyone of them could leave her child with her colleagues, if necessary, and rest assured that the child would be looked after, or she could borrow money from the common fund. At that time, I worked as a bartender in the food outlet of MIR. They say that I was good at it.

My sister has been working in this NGO since 1996, and I learned about its activity from her. In 2000, they launched a project called “Transparent Budget”. Since I had the basic economic education, I decided that I would like to try myself in it. In addition, I thought this was an incentive for further self-education. I joined the project as a freelancer and through this experience I got to know the organization from inside. I got “pollinated” with their ideas.

In 2000, the Internet was terra incognita for me. Therefore, I got most of the information from traditional sources: educational materials bought in shops or borrowed from the library. My colleagues, who worked with me on “Transparent Budget” – Dr Zinaida Klyukovich, professor of economics, and Vladimir Velichko, a former director of a large industrial enterprise, – helped me a lot. This collaboration was both a big honor and an opportunity to gain more knowledge and experience.

“Transparent Budget” had several lines of work. For the project team, budget transparency meant two things. Firstly, it meant the availability of information about the budget, as well as about the process of its development. Secondly, it meant the clarity and the user-friendly nature of that information. In terms of the first criterion, there already was political will for it at that time, if not yet an adequate legislative framework. As for the second criterion, things were a lot more complicated.

The problem is that budget documents are extremely hard for understanding, so that even those who have economic education might have difficulties interpreting them, let alone ordinary people. Therefore, one of our goals in the project was to interpret this specialized budget language and to translate it into the terms that everyone could understand. We wanted to issue a tutorial that would contain basic information on the budgeting process and content to facilitate understanding and to empower people, so that they would be able to fight for their interests in cooperation with municipal deputies.

As a result, the project team published a brochure titled “Transparent Budget: Theory, Practice and Education”. It was published in 1,500 copies and addressed the leaders and activists of different NGOs, journalists, and municipal deputies.

The cost of public utilities has unfortunately become the traditional sore spot for the local community. This was precisely why the project team, being decently equipped with all necessary theoretical and practical knowledge, tried to figure out the pricing mechanism for utilities tariffs in Novocherkassk. For doing this, we carried out an expert assessment of how the heating tariffs were priced by one of the city’s public utility companies. We got all the needed documents from the municipal tariffs committee. As a result of this review, we concluded that some of the expenses included into the tariff were unjustified, and the company was overcharging its consumers. These independent research findings were sent to the city council. Consequently, the city council incorporated the requirement of compulsory independent expertise on tariffs, which must be executed by designated institutions, into one of their regulatory documents called “Statutes on the Heating Tariffs Pricing”.

Another project we carried out was the analysis of the municipal budget with respect to its compliance to the needs of children. My colleagues developed a special method for accomplishing this. Luckily, we could still work quite freely back then. We acquired all the needed documents from the Department of Education and other authorities, analyzed them, made copies, put together some charts, and published our conclusions in a separate brochure.

While the project was being implemented, a new mayor won the elections in Novocherkassk. A former military officer, he also brought his team with the corresponding mindset and values. When we started requesting more documents, the new head of the Department of Education called us for a meeting and started speculating on how foreign security services might covertly determine the number of schools and students studying here. We did not even know what to answer, since this is open information anyway. What is there to hide?

I am often asked what our NGO is doing. Believe it or not, but it is, in fact, a complicated question. A mere listing of our cases, engagements, and all the fields of our work would not be sufficient for understanding why we exist and what we do. Simply put, we respond to social demands, both locally and systemically. We have a public assistance office that has been functioning in our NGO for many years. People can visit it and share their problems. Specialists of various competencies (lawyers, psychologists, etc.) help them find the way out of difficult situations. To identify the most pressing issues, which should be dealt with systemically, we analyze people’s complaints and complement this with a content analysis of the local media.

We have a special technique for dealing with identified problems. It includes public monitoring, as well as public expertise. At one point, one of such pressing problems was the public transport. People were complaining about it to all the authorities, and some came to our NGO’s public assistance office as well. We formed a special team of inspectors for carrying out a monitoring of the public transportation system. This team was working on different public transport routes for a week. They checked the compliance to the schedule, drivers’ behavior, as well as the overall condition of buses. While preparing for the monitoring, we requested and received from the city administration and the relevant contractors all the regulations that applied to the work of the public transport: municipal transportation contracts, schedules, etc.

Having studied all this information, we prepared a project brief with a list of conclusions and recommendations on how to improve the public transport. We discussed this list at a roundtable meeting with the managers and specialists of motor transport enterprises, as well as the heads of the relevant divisions of the municipal administration.

«Unfortunately, the head of Novocherkassk believes that he knows better than anyone what is happening in the city. This is why the officials listen to the human rights community very rarely»

We have been sitting on a powder keg for a long time already. In 2012, the law on “foreign agents” was adopted, but we thought it would not affect us. Political parties struggle for power, some NGOs monitor elections, but we never did anything of this kind. At one point, regional prosecutors had to report on the implementation of this law. Consequently, in 2013, we underwent a comprehensive inspection and were checked by the labor office, tax office, and fire safety authority. Subsequently, we had several judicial proceedings, some of which we won.

Public prosecution office had problems with the name of our organization: Regional Public Organization “Union ‘Women of the Don’”. According to them, there was no mentioning of the main line of activity. Surprisingly, we have been working with this name for 20 years, and it did not raise any particular problems. Another claim was related to our legal organizational form – “Regional Public Organization” – that allowed us to work only in our region, while our activity covered almost all the territory of the Southern Federal District.

The main and the most important claim of the public prosecution office was that our activity was allegedly political, and, consequently, we had to register as a “foreign agent”.

The reason that allowed them to make this conclusion is especially interesting. Here is one of the most illustrative examples: my colleagues and I, as the members of a public monitoring committee, visited one correctional facility where the prisoner N was serving his sentence. The wife of the prisoner N filed a complaint on the violations of his rights. It turned out that the prisoner N had been constantly receiving reprimands for being dressed inappropriately. He did not have a uniform because he was not given one. We helped resolve the case, but in one and a half months the prisoner N filed a complaint to the prosecutor’s office that we allegedly “induced him to commit illegal acts”, as if we almost persuaded him to organize a prison riot. No comments.

Then, we convened a conference where we decided to amend our Charter and to create a fund that would allow us to work in other regions without registering in any lists. The prosecutor’s office filed a lawsuit so that we would forcibly register as a “foreign agent”. I attended the trial, and it was a woesome spectacle.

«Someday, when our court proceedings will actually be competitive, our prosecutors, with the level of training they have today, will be losing even the sure cases»

Someone spray-painted on the walls of our office “The Reception of the US State Department”. They also threw bricks in our windows. Once they even tried to throw a bottle. After the “foreign agents” law was adopted, we installed window shutters and a steal door.

We are currently facing serious financial challenges: the amount of work is not reducing, while the reward is not rising either. But we cannot just close down all the operations, people will not understand us. Many of us have part-time jobs, so we are moving on. I think we will continue our work, but, all in all, I would say that a horrible end is better than a never-ending horror