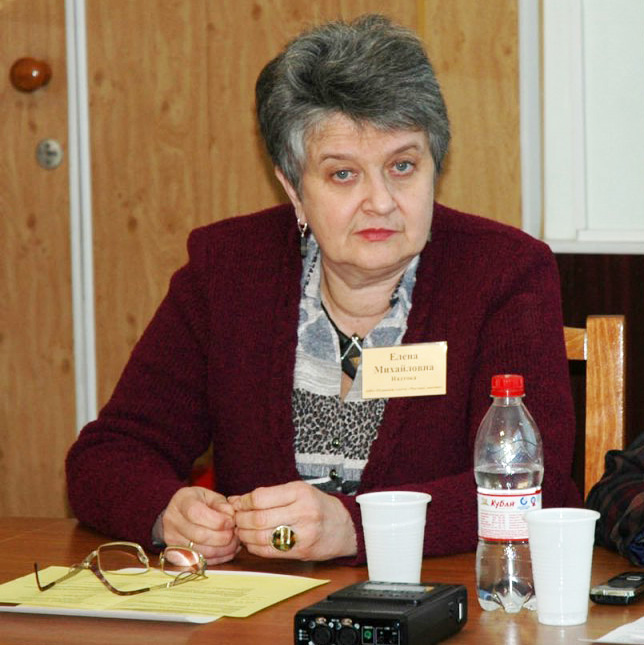 I am a member of the the Union “Women of the Don” and I also work at the editorial office of a non-commercial newspaper “Chastnaya Lavochka”. When perestroika began, I took part in the first alternative elections. This happened in 1990. In my administrative division there were five candidates, and I managed to get the largest number of votes. At that time, the authorities launched the investigation of the Novocherkassk tragedy, the shooting of a peaceful demonstration that happened on June 2, 1962. Thanks to Anatoly Sobchak, who visited our town back then, this issue gained nationwide resonance. I became the vice-chairman of a Special Public Investigative Committee.

They opened a court case. The prosecutor’s office was in charge of it. Some military interrogators also came. I personally participated in collecting the documents. We even issued a special issue of the journal “Krytyj Dvor” dedicated to the events of 1962. In it, the stories of the participants and witnesses were published for the first time. What is more important, the documents related to those events were also revealed, including the sentence, in which some of the instigators were sentenced to death, while others were sent to prison.

The Committee paid special attention to searching the burial places of those people, who died on the square in front of the city administration on June 2. The bodies were taken away from the city and covertly buried in the cemetery of Novoshakhtinsk, in the abandoned Roma cemetery in Tarasovskiy district, and near Taganrog. A special group was searching for human remains and belongings: pens, glasses, etc. It was very important for the identification of the deceased, which was executed by Vladimir Scherbakov, who worked in the laboratory #124 of Rostov-on-Don. This laboratory and Scherbakov himself are well-known for carrying out a similar work, the identification of a vast number of people, who died during the Chechen conflict.

In 1992, on the 30th anniversary of the tragedy we organized a reburial of the victims’ remains at the cemetery of Novocherkassk. We also opened a monument dedicated to the memory of those events: a memorial stone was installed in the place of shooting.

When the surnames of the deceased, whose remains were found in different burial places, were identified, the members of the Committee had to inform their relatives. I had to visit the mother of one boy named Karpenko. When the tragedy happened, he was 14-16 years old. That day he made a parachute jump, and he was returning home after that probably feeling happy. When he saw the protest he joined it, and this is how he ended up on the square, where he was shot. It was his birthday. For 30 years, no one knew what had happened to him; he left his mother, brother and sister. I got their old address, where he lived 30 years ago, and I went there. I found his mother living at the same place. I still can feel goosebumps on my skin, since after so many years I was telling her that we had found her son and that the identification would need to take place. When the deceased were reburied, I remember how we helped this old lady walking on her crutches to approach the grave. It is very good that eventually we buried them properly, with respect.

Until 1997, I worked as a CEO and an editor-in-chief on a TV channel. We had a large team, our own radio station, and TV broadcast. Although we only had one camera and one color-sequences editing device, we managed to produce three news shows per day and a lot of themed programs. We bought a car only in our last year. Before that, our journalists worked on foot. It happened so that, because of the conflict between the founding shareholders, I got fired, the channel was closed, and the staff was kicked out in the street. The channel had been so popular that ordinary people sometimes stopped us in the street and asked about what had happened, why there was no broadcast. In order to answer all those people’s questions, we created a newspaper “Chastnaya Lavochka” overnight and began to distribute it in the streets. In one year, I registered the newspaper, and we started positioning ourselves as human rights media. It is written in the registration certificate that the central themes of our newspaper are human rights, as well as consumers’, entrepreneurs’ and journalists’ protection. We also usually provide information management and information support to the Union “Women of the Don”.

In order to be a human rights defender or to write about it, one has to be prepared professionally. Human rights seminars that I attended helped me a lot in this respect. For instance, I remember taking part in a two-day training on the European Court of Human Rights, where I got to know about the existing judicial practices and the procedure for lodging complaints. Everything I have learned has been very useful. This year I won a case in the European Court of Human Rights, while two more complaints are still in Strasbourg, one of them has already been communicated. I provided advice on this topic and helped lodge complaints. All in all, a human rights newspaper has to go into litigation with officials and other “offended ones” quite often. Once in court, I had 14 cases against me and the newspaper simultaneously: two criminal cases, four administrative ones, and eight civil cases. My profession is journalism, and I still consider it the main priority. However, as you can see, I had to train myself for a new occupation.

«Having had our own rights violated, we began to fight and to help others defend their rights as well»

We work with children a lot and teach them to stand up for their rights. We were the first newspaper to open a juvenile legal aid office, and you would still not be able to find anything like this anywhere. We have been working with All-Russian Children Centre “Orlenok” for several years and recently started cooperating with the International Children Centre “Artek”. The newspaper has a cub reporters team. Some of the children take part in theatre projects launched by “Women of the Don.”

It is always very interesting to get feedback and to learn about the results of our work. I often recall the seminar held by “Women of the Don” in one health resort on the Black Sea coast. It was partially devoted to the psychosocial rehabilitation of the police officers. I bet we scared other visitors, when under psychologists’ supervision, the officers shouted at the top of their lungs in order to de-stress. After a while I met one of that seminar’s participants in Novocherkassk, and he told me that sometimes, when he visits his summer house, he shouts with all his might to recover emotionally. After such exercises he can peacefully work with people again. At the seminar, the police officers were told about human rights. By means of role-playing games they learned how to communicate with the teenagers. Up to now, I sometimes meet those participants. They usually approach, greet and thank me.

I very much like receiving such feedback. We feel the support of other people and appreciate it a lot.