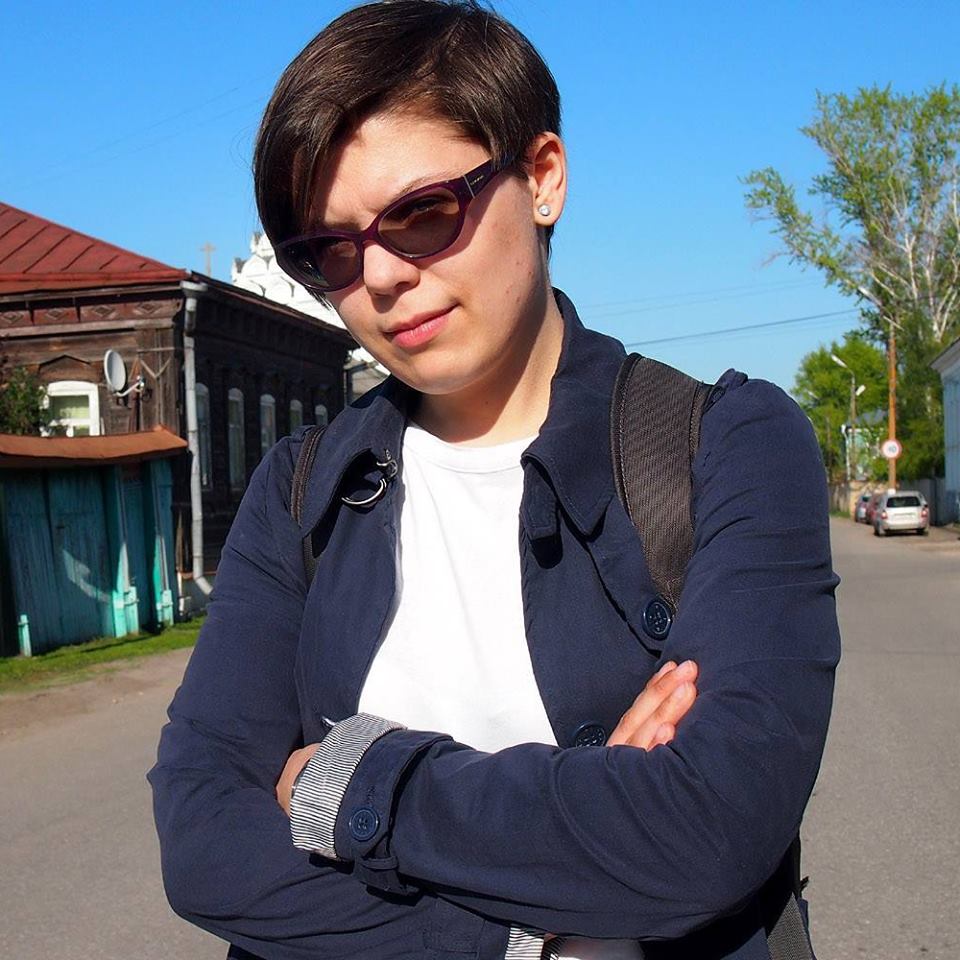 I came to Svetlana Alekseyevna at the Civic Assistance Committee (CAC) as a visitor and now I consult people myself. In 2010, I arrived from Krasnodar and was in trouble because I had experienced persecution for civic activism in the region. We worked with ethnic minorities and monitored human rights violations. My colleagues and I were put under pressure, they even framed us up, but we managed to close the case. Then, as it turned out, another one was on its way, but I did not know that yet.

I had nobody to rely on except my friends, who started an online campaign, but I knew it would not help. They were keenly trying to put me behind the bars, as my lawyer said. We decided to ask Svetlana Alekseyevna for help, it was the time when the Committee was situated in a different office, which was a basement. The head of CAC had a tiny corner between the reception and the accounting department; she was sitting there on a small chair, and I was sitting by the door. She received endless visitors during our conversation.

I was trying to tell her how terrible it all was, that I needed help, even though it was unclear how to stop the Investigation Committee. I thought that she would not even understand my barely coherent story, but, straight after I finished, she said that we would go to Vladimir Lukin, the Human Rights Ombudsman, and call the Presidential Human Rights Council. We will go to Krasnodar and take concrete steps. I was thrilled because that was something that no one else could ever have done for me.

We now have a large office with much better conditions, compared to the previous location. The Mayor of Moscow provided us with council-owned premises, which was very noble of him. Our doors are always open to people in trouble. That is why it is so important for us to have a normal room for receiving refugees.

Displaced persons happen to be our target group. More specifically, we mostly work with asylum seekers. And the substantial part of all those who come are foreign citizens, who fled their countries either because of war, or because of some environmental disaster, or because of political persecution.

We also work with labor migrants who often get literally enslaved, and forced labor becomes a routine attribute of their everyday life. We help the victims of neo-Nazis, i.e. people who get assaulted because of their skin color, “wrong” clothing or a Muslim headscarf. We have a number of projects for helping prisoners as well. There are educational projects on human rights and international relations. In addition to consulting, we help with the acquisition of everyday personal items and medical supplies; if we can afford it, we also provide humanitarian assistance.

«Migration is like a tide, like the course of a river, it is a natural force which is impossible to fight with — it is just there. Any attempt to resist it is absolutely futile; it is like fighting with the tide»

This work is hard; nobody comes here to tell a funny story. When we manage to help, people often just disappear. Sometimes we find out in three years that somebody got his refund, or that an appeal has finally reached the authorities.

Everyone has their own motivation here, but the personal story of each particular visitor is a shared thing. Up to several thousand people come to our reception room every year. When we hold meetings, interviews or receive visitors, we tell them sometimes «Sorry, we have consultation hours.» When a person comes with some trouble, we at least listen to him or her and then redirect the person somewhere else. Those people who come, they are the main motivation for us.

Consultations are the hardest part of our job, because people bring tragic stories, some suffer from mental imbalance, some are depressed or threatened. Sometimes refugees do not realize what kind of place we are. They do not understand, at first, that here they have an opportunity to speak freely and they start addressing us, as if we were some government officials, and, after a while, they ask «But aren’t you the Federal Migration Service (FMS)?»

We do not rely on foreign money exclusively. If it was only possible to raise necessary funds through Russian sources and donations, then we would be on top of the world, but it is not possible. We take part in every Russian competition and get to win some of them: for instance, we got several presidential grants and some special donations from Moscow City Council to support our adaptation center for refugee children. But the number of people who come to us asking for help exceeds all limits. Those can be pregnant women requiring emergency medical care, elderly people in a critical condition, or people with injuries and disabilities. We manage to provide help to many of them, because we have a lot of projects.

«We have volunteers from abroad who come for an internship and say «It’s so exciting here, not like in those London suburbs, there it’s so boring. Same in Amsterdam and Paris, but here, here life is bustling.»

The largest of those projects is funded by the Office of the UN High Commissioner for Refugees. There are other UN-funded projects, such as assistance to the victims of forced labor. There are some contributors which are essential for us, because without them we would simply have to tell people «Please, go away, there is no help for you here.».

We report to the Office of the UN High Commissioner on an ongoing basis, these reports shape international statistic. I think the government is paying attention to it. 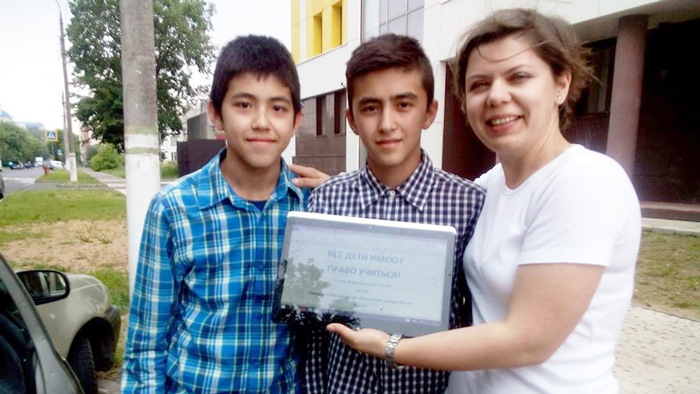 Anastasia Denisova with children who were expelled from eighth and tenth grades for expired residence registration, Tver

A regular report on human rights in Russia is reviewed in the UN. The employees of the organization pose questions to Russian officials about the report made by Russian human rights defenders. Of course, this is wrong, because the UN should not be the only site for this. We need adequate discussion platforms inside the country.

We get invitations to public meetings with FMS, and we always attend them, however, the format of those meetings is not suited for a debate. There are speeches about the updates and changes in legislation and procedures. One can ask questions, but there is no real discussion about the implementation of laws.

My family and I sold our property in Krasnodar and bought a small apartment in Moscow Region. We are happy, some people do not even have that much. The human rights defender’s salary is not enough for living a respectable life, I am constantly stressed about paying back my loans.

I hold a degree in philology, qualified as an English and German teacher. We studied international and Russian literature in great detail. My degree is connected with both pedagogy and literary studies. It helped me in my career. I was interested in the subject of hate speech since my first university projects.

«I cannot compare myself to refugees. One thing is to come from a small town; but to come without knowing the language, without papers and with a visibly different appearance is a totally different thing.»

I never thought I would live near Moscow. I loved Krasnodar, I have lived there for over 26 years, I love that land. I grew up there. My relatives and my mother are still living there. At first, I did not like Moscow, but now I am learning to love it. The city center is stunning. It is too bad one cannot see anything like this in Krasnodar; there are almost no old buildings left.