Head of the Civic Assistance Committee, defends the rights of refugees and forcibly displaced persons for over 20 years

I was working for free in my organization for 10 years in a row. We received our first grant through an agreement with the UNHCR in 1998, while the organization itself had been in operation since 1988. I would say that those were extremely hard times, because it was difficult to find money even to buy a dinner for a refugee. 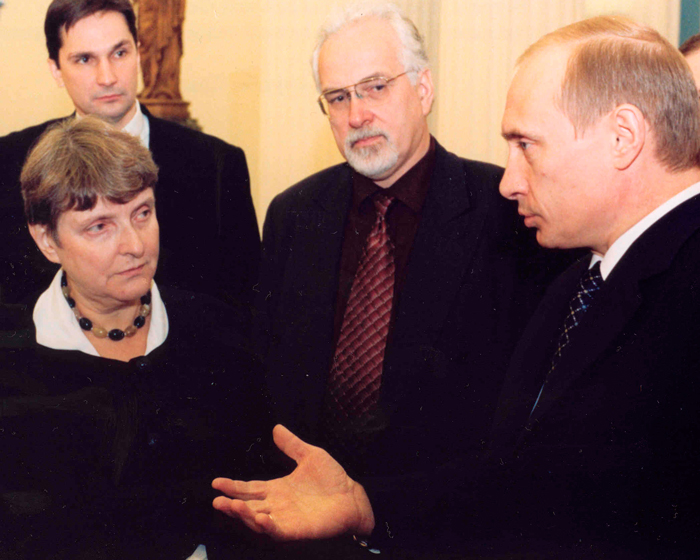 The Human Rights Council at the meeting with the Russian President

We have a requirement that all our new employees, except refugees, should work for free for one year. This clause is included in our charter, but we will have to remove unfortunately, for it is almost impossible for young people nowadays to work for free. People come from far away, they need to rent an apartment; they need to eat something. When I was young, I earned my living by teaching, but when we started to work professionally, it became impossible to have a double job. Therefore, we will have to drop that requirement, regretfully. However, we still have a trial period, which is half-paid, so we get to see how people actually work. If they cannot take the pressure and do not sympathise with refugees, they usually quit. Some skilled professionals also leave us. Young people want to be successful, but unfortunately, success is a rare thing in our type of business.

Sometimes it may seem that our work goes in vain, although, of course, I realize that this is not the case. Little strokes fell great oaks. We had some cases when we were trying to achieve something for a very long period of time, and then, suddenly, this something was becoming a part of the law. This happened so with Azerbaijani refugees who arrived in 1989-1990s before the collapse of the USSR. They have been living in Russia ever since, but had not been recognized as citizens before 2002. We were trying to change this.

When I was a member of the Presidential Council for Civil Society Institutions and Human Rights, we had a meeting once where a representative of the Federal Migration Service (FMS) explained why officials believed that such people could not get citizenship. Apparently, that time it penetrated the mind of judge Zhinkov, the Deputy Chairman of the Supreme Court – we have tried everything before to reach him, but nothing worked. So, eye to eye contact is important. When he heard this and understood the problem, he said straight after listening to our arguments «No, how can that be? Confirm the fact of their permanent residence from February 6, 1992 and that’s it, they all will become citizens.» He issued a letter of instruction to the courts, and people started flowing there in a stream. Further, then-former refugees were asking FMS where to get a new passport. Thus, a very serious problem was solved.

«It is pointless to talk about rights with a person who has nothing to feed his or her children. We do our best to satisfy their basic needs and only then suggest taking concrete steps.»

At one point, there were many internally displaced persons from Chechnya in this country, I received several letters and paid a visit to the center where these people were being kept. I put together a list of particularly disadvantaged people and sent them some money. Then I began to receive letters from other places. One woman wrote that her family was living in a pram storage room, at someone’s closet under the stairs; they were four people with two small children and had nothing to eat. I sent them five hundred rubles; two years later that woman suddenly came into our office in order to pay back that money. I did not want to accept it, but it was amazingly touching.

Trip to the Itum-Kale district of Chechnya

Another woman sent me a letter which almost made me burst into tears. It read “You sent us five hundred rubles…,” it was during the First Chechen Campaign when the inflation rate was different, “We bought a pair of boots for our grandfather, a hat for our son, a sack of potatoes, some sunflower oil, and ten kilograms of onions. We roasted the potatoes with onions in sunflower oil and were satiated for the first time in several months.” This was very touching. You understand that, if a person feels compelled to write a response, then it means that all this work is not going in vain, especially when children are involved.

There was this successful business lady that came to our office once. She was an interior designer of upper-class apartments. She showed us her portfolio. Yet, it all began when she bought a tiny room in Moscow, but could not get her residence registration. We helped her appeal, and she managed to get it eventually. She filed a lawsuit and won her case. Her business took off and she became rich. This woman came to tell us her story and to donate some money.

Some other people came to work following some invitation that they had received. They hoped they would work in some firm or organization. Then we started receiving desperate letters. They either were rejected, or were not given any work, or were paid a pittance. One family was straightaway offered to buy furniture for 90,000 rubles. They were even provided with accommodation, and they were happy at first, but then this accommodation turned out to be a classroom in a half-ruined school. There was no furniture, so they bought it from some middle man. It also turned out that the 90,000 rubles was their salary for the whole next period. They did not know what they were going to eat. If it was not for the locals who brought milk for their children, they would have hardly survived.

There is no such thing as quotas for Ukrainian refugees. According to the law, a person has the right to submit an application at the place of arrival. Those quotas are FMS’ own invention.

According to the law on foreign agents, we must mark all materials as published and distributed by a non-profit organization acting as a foreign agent. We will not do this. Let them fine us, or shut us down, we will fight, but we will not bear that humiliating label, not under any circumstances.

Asceticism and contempt for money is a part of Russian culture, therefore the campaign against us is trying to convince people that we execute someone’s orders and line our pockets thereby. We work for some “perks,” they say. It is a ridiculous cliché. The amount of money that we receive is very small, and many of those who quit, like highly qualified lawyers and barristers, do so because they can earn our monthly salary with just one case somewhere else. Their first installment is likely to be more than our entire monthly salary. Of course, their position is understandable, if they have families.

«We cannot hang a sign plate like in the times of war, saying «The Committee is closed. Everyone is depressed.»

How do we cope with stress? Do we have much choice? First, we cannot get depressed. We cannot, because when we get a call about a new case, all the hustle and bustle starts right away. Besides, we often get such big shots of adrenaline from the government that it is really hard to fall into depression.