Provides social and legal consultations to migrants and refugees, helps to lodge complaints

I come from Izhevsk. I moved to Moscow when I was 17 and started my degree in social anthropology. This was a conscious choice.

When I was a child I had a book about humans, about the family of hominids, I was curious to know why humans were descended from apes. The one I remember best was Lucy, Australopithecus, the first known specimen of its kind. It intrigued me. I trusted my intuition. Besides, I liked the curriculum of the programme, so I decided that it was right for me.

During my studies, my classmates and I used to reflect on our future careers. We acquired such a broad spectrum of knowledge, we learned so much, and, at the same time, it was unclear how this could be put into use. I stayed home for some months after my graduation looking for a job, and I found one in the Moscow House of Nationalities (MHN). I decided that it must have been the place where I could apply my knowledge. Later, I realized I was mistaken.

It was late 2011. The MHN is a publicly funded institution, controlled by the local government. After working there for six months I realized that the reason this institution existed was to provide jobs for military retirees, would-be Moscow government officials, and, perhaps, for money laundering. This was my impression, at least.

I started thinking about human rights in my last university year because of those political events that took place in the country at the time: the parliamentary elections, the protests at Bolotnaya Square and Sakharov Avenue. I was reading the website of the Civic Assistance Committee (CAC), which was not as good-looking as it is now, the older version was quite tacky, but it had a lot of texts. I was sitting there and reading every page, and I liked what I saw. Those texts appealed to my then-current inner strivings.

A classmate who was working at CAC advised me to come to the organization as a volunteer, hinting that, if I get lucky, I may become a member of the permanent staff. After a month of volunteering for labor migrants assistance project, I showed a good performance and was accepted. I was very lucky. 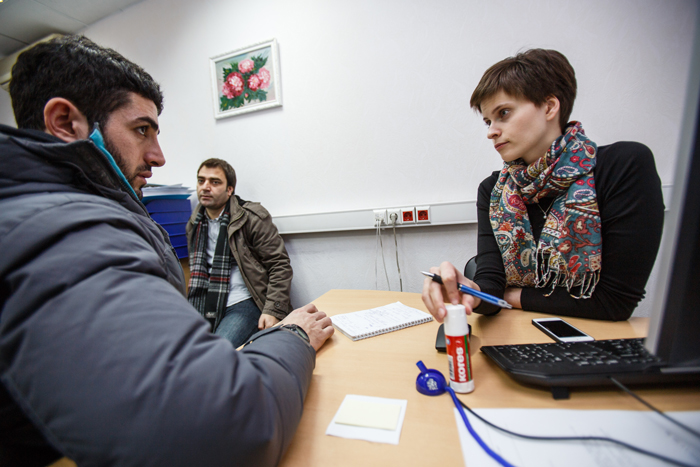 I have a regular work schedule, Monday to Friday. We are open for consultations three days a week. I provide those consultations, i.e. I talk to people: labor migrants, refugees, all those who seek help. I also have a certain degree of administrative responsibility. On Tuesdays and Thursdays, when consultations are off, I concentrate on case studies and coordinate lawyers’ work.

We do not have any vertical hierarchy in our organization. Svetlana Alekseyevna is the Chairman of the Committee, and, if we cannot find a solution and need an expert opinion, we turn directly to her. We are not restricted in making our decisions, due to our horizontal structure. Of course, some of the decisions need to be taken collectively. In such cases we try to reach a consensus.

It is not only Syrians, Afghans and Africans who come to the Committee; there are also a lot of refugees from Ukraine. They hold a very uncertain position in Russia. You may have seen Ukrainian refugees on TV, receiving a warm welcome, accommodated and supported. The real picture is not so bright. There was a decision to allocate certain percentages of Ukrainian refugees in the Russian regions. Moscow with its region, St. Petersburg with its region, Rostov-on-Don and the Crimea regions are not on the list. This means that local offices of FMS are instructed not to accept any refugees in the capital. This is interpreted as some kind of “asylum quota.”

These words were always used with quotation marks previously, but not in the recent letters from FMS. Mythical quotas for temporary asylum were introduced in practice, which is absurd, because it is illegal to limit the right to seek asylum. A refugee should be able to apply for asylum at the place where he or she has come to. If people from Donetsk come to Moscow, they should have the right to seek refuge here, but this does not work in practice. When they go to FMS, they are told that refugees are not received here; they say “We can’t provide you with anything, because we have no quotas. But there are other regions, and you should go there.” Then they suggest them to travel to some depressing regions like Magadan or Khabarovsk Territory.

«We have different refugees coming to us; there are some from the academic community. I am going to interview a nuclear physicist from the Middle East soon. This man’s life is in danger.»

FMS offers Ukrainians to join the compatriots resettlement programme. This voluntary programme was designed to accommodate former Soviet citizens, who willingly move to Russia, on a particular territory inside the country. They try to solve the demographic problem in such a way. Some of the refugees have never been to Siberia and the Far East, and they are devastated upon arrival. It is impossible to find a job, impossible to get one’s papers, and the only way out they see is to come back to Moscow or St. Petersburg, those money circulation centers, where it is at least possible to earn a living. These so-called “quotas” create additional obstacles for those people.

At first, those people who were going to the distant regions even got their travel expenses covered and received orientations in situ together with the directions to their temporary settlement. Now, all they get is a finger on the map and “Now go!” As a rule, these people get stuck in a “legal limbo” since they are refugees, and, at the same, time they are not. How do you obtain a legal status? They are offered to apply for a patent, which is an alternative work permit that allows one to work for individuals and companies. It is provided for the CIS citizens. But people end up in a vicious circle, because they run out of money, they need papers, and that patent is expensive, they have to pay for it every month, and they have no money. They do not get that patent and remain in suspension.

«When the Ukrainian flow began, people were coming and asking “Is this the organization that helps Ukrainians?” We had to reply that the Civic Assistance Committee helps everyone, regardless of their nationality.»

We work on requests: a person comes, fills in an application with our help, and then he or she starts to receive assistance, since there are no legal grounds for refusal. It is easy for them to reject a person who comes in person with a request or a claim in his or her hand — there is no quota, go somewhere else. But they cannot write this in official letters, since they are breaking the law. 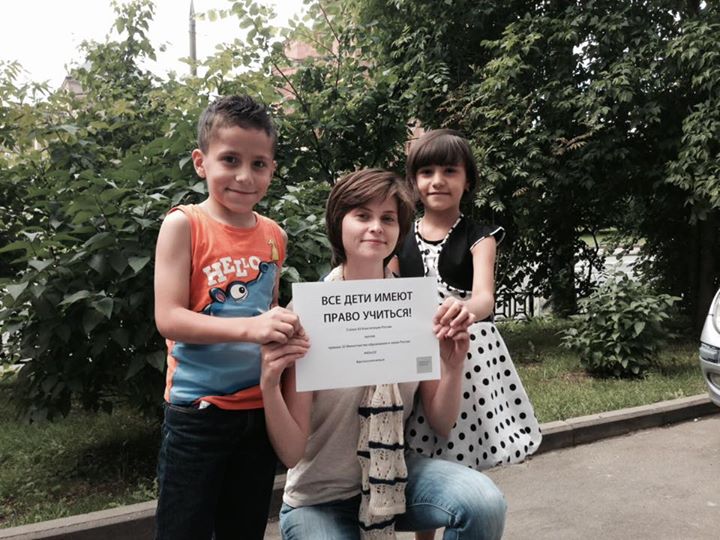 Photo with refugee children from Syria

Despite all the progress, scientific and social achievements of this world, there are still places people are forced to flee from, and this means that our work will never be done.

My dream is to study, but I understand that the Russian science is going down because of the recent educational reforms. One of my colleagues in the Committee has just got his PhD in Philosophy, and he says that the Russian science is in decline. This can be seen on the example of what has happened to the Library of the Institute of Scientific Information on Social Sciences of the Russian Academy of Sciences, part of which has burnt down recently, and in the fact that scientific administration has been taken over by some bureaucrats, who have nothing to do with science. These symptoms are very alarming. I think that, if I continue my studies, it will very likely be outside Russia. But I really want to continue my research and develop in that field.

The university influenced my views on religion. I read Erich Fromm, and he wrote that internal strength could allow living without religion and that one needs to look inside oneself to find the source of love. I sympathize with this view.

I have intellectual cravings for something meaningful, I realized that I cannot read fiction right now, and I only read academic works and popular science. I read about things that get me closer to nature, history, reason, knowledge — all those are my favorite words.