Represents clients in court and does public relations

I came to this NGO in 2012 right after finishing my alternative civilian service and an internship at the International Youth Human Rights Movement. The organization was stagnating back then: it changed several lawyers, all the experienced specialists left and were replaced by young beginners. I was one of those beginners. The work was tough. Our chairperson, Ella Polyakova, kept us all on a short leash. We had to obtain lots of approvals for NGO’s complaints and applications to different authorities. We constantly redrafted the same documents – this was a difficult learning process.

The experienced lawyers were leaving the NGO because of various reasons: one of them started to work for a commercial entity, the other one became a practicing defense lawyer. I suppose they were looking for higher wages and professional development. Some people were simply unable to work as coordinators for the protection of soldiers’ rights; people rarely stayed for more than one year. This was a very intensive job: back then we had to communicate a lot with the conscripts who escaped their military bases. You could receive a call around-the-clock and had to take off early in the morning or late at night to come to the office and work. Moreover, it was often necessary to communicate with the victims of violence: we had to perform questionings, to document statements, to file complaints, and to bring all these things to the investigative committee, where one’s presence would usually meet some inadequate reaction. Just several months of such work could burn one out completely.

So far, I feel comfortable. Sometimes I experience low points, when it seems that nothing can be changed. In such moments I change the type of my activity and get involved in doing some different things connected somehow to the operations of our NGO.

«In 2012, “escapees”, i.e. the soldiers who had to leave their military base without authorization, were coming to us regularly: two to three persons a month»

Since the ‘foreign agents law’ was adopted, we were checked more than ten times. The Ministry of Civil Defense, the Department for Countering Extremism, the Fire Protection Service, the Prosecutor’s Office, and the Ministry of Justice – all of them conducted inspections. As a rule, those inspections were initiated upon requests from military enlistment offices or from some dubious ‘citizens’ carrying out ‘anti-corruption investigations’. There were also some personal complaints on Ella Polyakova. A part of them was referring to some personal data provided by the enlistment offices, i.e. some of her children’s private information was disclosed. Sometimes the police would call us in for questioning. Those were also some anti-corruption units.

At the height of the media frenzy in 2014, when Soldiers’ mothers were included into the ‘foreign agents list’, we also received threats. Some weirdoes called or wrote in social networks and tried to express with the help of obscene language their aversion towards our work. Federal media added fuel to the flames. There are people who do not accept our views and do not understand our ideas – the sole notion of human rights is alien to them. We accept this fact and, unlike them, we leave them be without forcing them to accept our worldview. 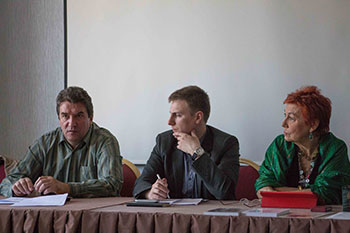 The use of the ‘foreign agents’ stigma is a planned campaign; it is an instrument which appeared not out of the blue. Perhaps, the initial goal was not as wide-ranging; yet, if the state wanted to crush the human rights movement, it failed to do so. Unfortunately, it still did manage to stigmatize human rights defenders in the public eye.

Once an organization makes it into the list, it immediately gets a pile of inspections and suffers additional financial losses. For instance, we had to order a special audit, which was very costly. In addition, one bears some reputation risks, of course, which also brings an unspoken refusal to cooperate on the side of state authorities. It is impossible to defend human rights under such conditions.

We were the first NGO that applied for being excluded from the ‘foreign agents list’, despite the fact that the corresponding procedure had not been anticipated by the legislation. In fact, this was done in the public interest. We applied and were rejected. We then appealed this decision in court and, while we were doing this, the information got to the federal level and was picked up by the media. As a result, Ella Pamfilova, the Russian ombudsman for human rights, requested, while meeting the President, that a mechanism for excluding NGOs from the list had to be developed. As a consequence, the law was modified accordingly.

«Any society needs some positive criticism of authorities. It serves like an indicator, which tells us where we are»

The ‘foreign agents law’ is just a small part of a bigger problem related to the freedom of association.

Recently, two sociological surveys have been conducted for us. One of them was dedicated to estimating the recognition of the Soldiers’ mothers’ brand and to evaluating public’s attitude towards the organization’s activities. This was a phone survey which covered various age and social groups. We were pleasantly surprised to find out that 70 percent of Saint-Petersburg’s population knew the brand and that approximately the same share of those who knew us evaluated our work positively.